The controversy over the newly opened Jean Nouvel Philharmonie de Paris is reminiscent of another controversial cultural building project meant to significantly affect a historic district of that great city. 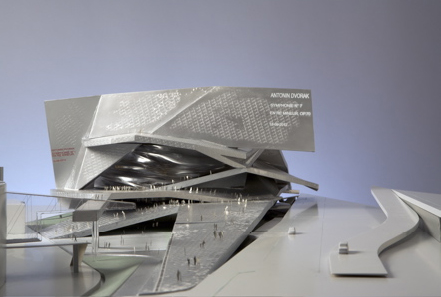 It was the 1960s, a time of cultural unrest, when the Paris government decided to dismantle the historic markets of the Beauborg and replace them with a new cultural center. Two unknown, non-French architects, Renzo Piano and Richard Rogers, were chosen to design what became the Centre Pompidou, referred to today as the Beauborg. The architectural competition was won, so the story goes, because the proposal promised a building that was “a cross between the British Museum and Times Square.” The radical iconic structure is transparent to those on the outside, with heating pipes and interior stairs exposed. Local residents could see that what was happening inside was not a mystery and therefore less foreboding. The plaza in front of the building, the Place Centre Pompidou, is a gathering place for neighbors, tourists, museum visitors, buskers and vendors. Designed like the Piazza del Campo in Siena, it is a shape that welcomes visitors: one can imagine skate boarding right into the museum.

The Philharmonie de Paris (even the name is unwelcoming to many) is in a somewhat gritty Muslim neighborhood in the 19th Arrondissement. The building is meant to be easily reached by public transportation and to provide accessible programming at affordable prices. Yet a French ‘starchitect’, known for his effete taste, designed a bunker like structure that is anything but accessible.

For arts organizations, architectural design can project a subtle psychological or sociological negative barrier. The great 19th century limestone, windowless, urban arts buildings with grand staircases were built by and for the wealthy class in the city. The current trend is to remove these barriers: the grand exterior staircase entrance to of the Brooklyn Museum has given way to a street level glass atrium that says to the neighborhood, “come, look inside, we are here for you.” Lincoln Center transformed its once inaccessible appearance (it was built on a plinth, a cultural oasis in the middle of an urban wasteland, unfriendly and almost invisible to neighborhood pedestrian) by simply extending a welcoming stairway and relocating the street traffic below grade. The glass pyramid at the renovated Louvre literally invites those outside to look in.

The concrete barriers on the beach at Normandy

But the new Philarmonie is anything but welcoming. An extra-terrestrial looking structure more reminiscent of the triangular concrete barriers placed on the beaches of Normandy to deter the allied invasion, the design makes no attempt to respond to the neighborhood, to engage the local community or to send a signal that the hoi polloi are welcomed. Its acoustics are reported excellent for classical music, but most of today’s “accessible music” is amplified.

The Parisian concert attendees are unhappy with the location, and if the psychological architectural symbols are as predicted, the Philharmonie de Paris could become a symbol not of access but an inaccessible monument to excess.